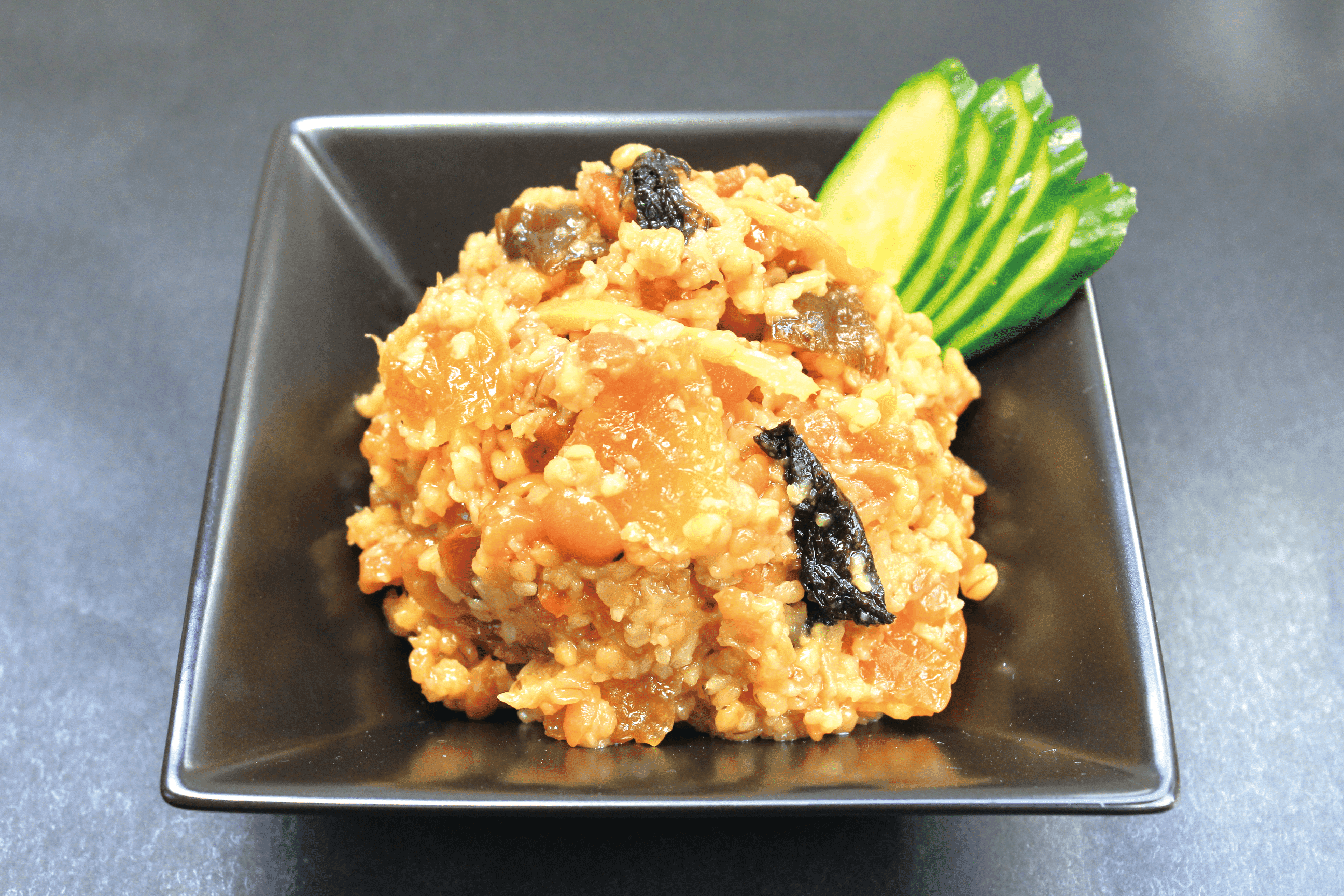 "Kishu Kinzanji Miso" is not used as a condiment like ordinary miso, but is a foodstuff mainly eaten as it is. In Wakayama Prefecture, it has been continually made using production methods unchanged since olden times. "Kishu Kinzanji Miso" is manufactured by mixing vegetables with koji (1) and then fermenting and maturing them. Various textures and flavors are produced according to the mixing condition of the ingredients. Another characteristic is that it allows people to enjoy the soft texture, though grains of the koji remain.
Ordinary "Kinzanji Miso" distributed in Japan is produced with koji made from soy beans or wheat, along with added ingredients such as uri, eggplant, and ginger. By contrast, "Kishu Kinzanji Miso" is produced using koji made from a base of three ingredients, soy beans, barley and rice. All of uri, eggplant, ginger and shiso are also added as vegetable ingredients.
As the production method, first, washed and soaked rice, barley and soy beans are steamed. After cooling, they are covered with seed malt to make koji. Next, the koji is mixed with the vegetable ingredients, salt and sugar. This mixture is then layered, fermented and matured.
The shipping standard for "Kishu Kinzanji Miso" requires that it still has a granular texture; the color has transformed from a yellowish color to dark brown; and a person with over 10 years of experience of producing "Kinzanji Miso" has made a sensory analysis of the aroma, taste and texture of the miso prior to shipment.
The origins of "Kishu Kinzanji Miso" date back to the Kamakura Period (2). When the Buddhist monk Kakushin (3) returned to Japan from China under the Song Dynasty, the production method was transmitted around the present-day Yuasa, Gobo and other districts of Wakayama Prefecture. Then "Kishu Kinzanji Miso" became to be known as a preserved food among the people, and later, it spread to other parts of the Kishu Region (4) as a result of the industrial promotion policies of the local feudal lords.
Industrial production methods corresponding to the present methods were established by 1615, when the miso was already being sold in Edo (present-day Tokyo) (5), the capital of the Tokugawa shogunate, as a specialty of the Kishu Region.
Ever since, miso sold under the name of "Kishu Kinzanji Miso" has been produced in Wakayama Prefecture, especially Wakayama City, Yuasa Town and Gobo City, according to the time-honored method.
In 1951, the Kishu Miso Manufacturers Cooperative was established by miso producers in Wakayama Prefecture. They drew up regulations concerning the use of the designation, "Kishu Kinzanji Miso", in order to protect their brand.
Koji: created by propagating microorganisms--chiefly koji mold (Aspergillus oryzae), which is efficacious in fermenting foodstuffs--on grains such as rice and barley or legumes such as soy beans. Many kinds of fermented foods and drinks, such as Nihonshu (Japanese sake), miso, tsukemono (preserved vegetables) and shoyu (soy sauce) are made by using the various catabolic enzymes produced by koji mold.
The Kamakura Period: 1185-1333. It is a period of Japanese history characterized by the establishment of a shogunate (feudal military government) in Kamakura. From Kamakura to Edo Period (1603-1867), feudalistic politics of military governance by samurai continued.
From the 7th century onwards, many monks were sent to the continent, especially China under the Sui and Tang Dynasties, to study Buddhism and advanced culture and technology.
Kishu Region: The basic administrative unit in Japan until 1873 was the kuni or domain. The Kishu region corresponds to today's Wakayama Prefecture.
The Edo Period: 1603-1867. It is a period of Japanese history characterized by the establishment of a shogunate (feudal military government) in Edo (now Tokyo). Political administration under the Tokugawa clan began when Tokugawa Ieyasu became the era's first shogun.